Making Up, an all-new laugh-out-loud romantic comedy standalone from New York Times bestselling author Helena Hunting is coming 16th July and we
have a fun excerpt from
chapter one for you! 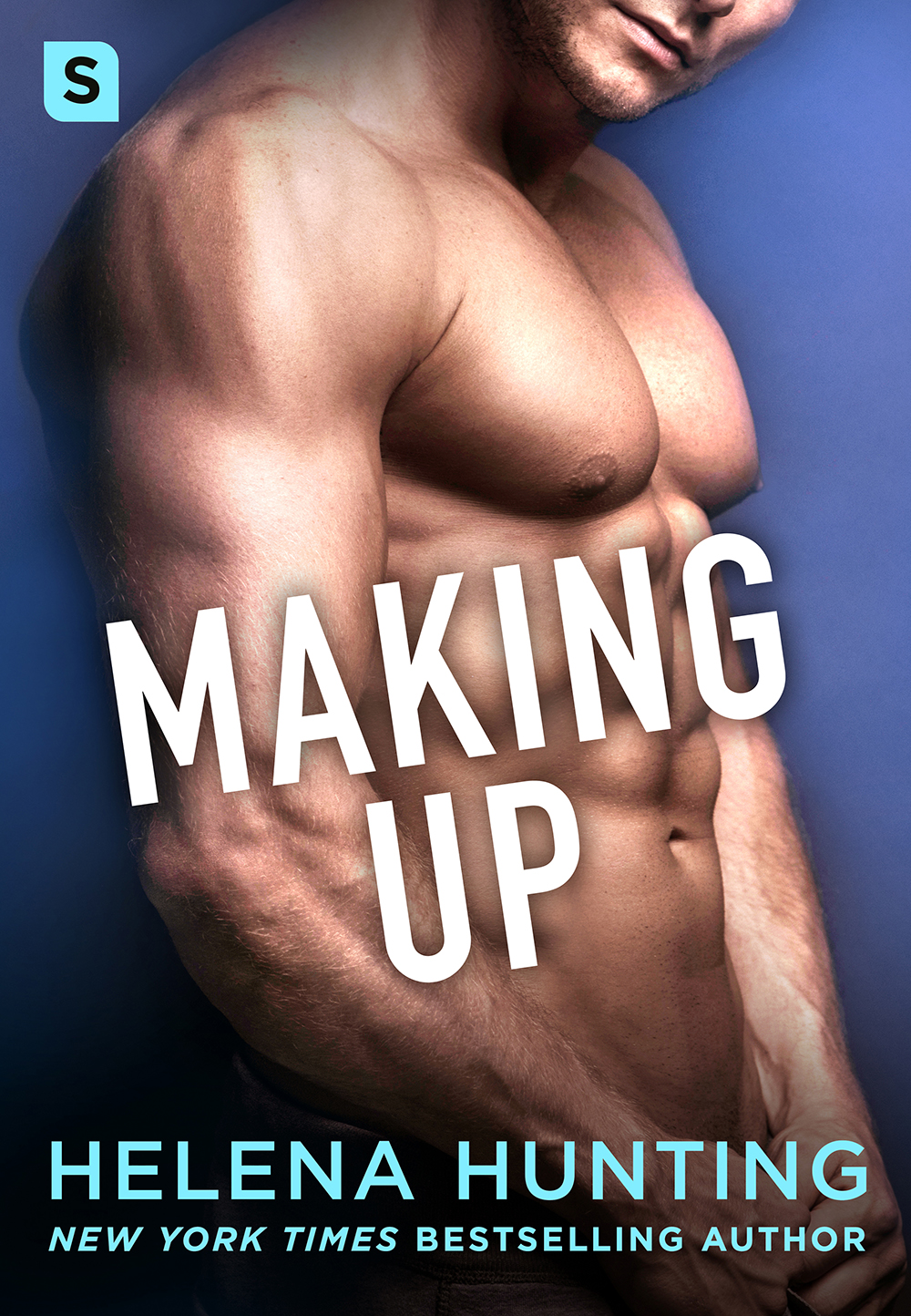 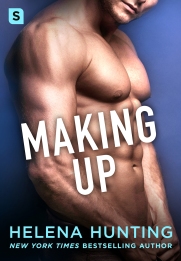 Cosy Felton is great at her job—she knows just how to handle the awkwardness that comes with working at an adult toy store. So when the hottest guy she’s ever seen walks into the shop looking completely overwhelmed, she’s more than happy to turn on the charm and help him purchase all of the items on his list.

Griffin Mills is using his business trip in Las Vegas as a chance to escape the broken pieces of his life in New York City. The last thing he wants is to be put in charge of buying gag gifts for his friend’s bachelor party. Despite being totally out of his element, and mortified by the whole experience, Griffin is pleasantly surprised when he finds himself attracted to the sales girl that helped him.

As skeptical as Cosy may be of Griffin’s motivations, there’s something about him that intrigues her. But sometimes what happens in Vegas doesn’t always stay in Vegas and when real life gets in the way, all bets are off. Filled with hilariously awkward situations and enough sexual chemistry to power Sin City, Making Up is the next standalone in the Shacking Up world.

EXCERPT FROM CHAPTER ONE

Working in an adult toy store is the opposite of glamorous. Sure, I get a fifty-percent discount, which is a real perk, but it doesn’t offset some of the weirdness I have to deal with. Such as Eugene, one of the locals who frequents the shop on a regular basis. He came in this morning and handled all the display toys. He’s mostly harmless, but the silicone fondling is pretty high on the creepy factor. Eventually I told him I had to close up for a few minutes so I could grab lunch. The deli across the street has the best daily specials.

While I wait for my chicken shawarma, I make a mental list of all the things I need to do this afternoon: check the magazines to make sure the pages aren’t stuck together, restock the flavored lube, and wipe down everything Eugene molested with toy cleaner. Once I’ve tackled those less-than-fun chores, I can work on my assignment for my hospitality class, provided I don’t have real customers.

I glance out the window, checking to make sure Eugene isn’t loitering around in front of the store, waiting to be let back in. Sometimes he’ll stop by more than once during my shift. He’s not there—thank God—but there’s a black sports car parked in the lot. It looks nice and possibly expensive, which might mean an actual customer who will spend money.

Loki, the cashier at the deli, hands me my drinks and shawarma.

“Thanks! Have a great day!”

As I leave the store, I see a man in a suit reading the sign I taped to the door. I don’t want to miss a potential customer, so I take a deep breath and mentally shift gears, putting on my best sales-person mask. I have to pretend to be a completely different person when I deal with customers, so I can get through what would otherwise be a fairly embarrassing event. Discussing the ins and outs of sex toys with strangers is not something I particularly enjoy, but it’s a paycheck, so I’ve learned to roll with it.

My root beer foams and drips down the straw while my coffee sloshes onto my hand—the lids never fit right—and my chicken shawarma dangles perilously between my pinkie and ring finger as I cross the street.

The suit doesn’t look creepy like Eugene, but then, suits can be deceiving. Half the time they think they can proposition me like a sex worker. Or they pretend the weird stuff they’re buying is a gift and not for them. Pfft. I know better.

Suit turns and heads for his car, so I call out, “Hey! You in the suit, hold on!”

His shoulders hunch, as if he’s trying to be smaller, which is physically impossible. Based on the size of him, he probably played college football. Or he has Marvel comic hero blood relatives. Either way, he’s a big dude.

He stops walking, though, which is good. I could use some sales today. The commission boost is always a plus to the shitty minimum wage. Rent is due next week, and judging by his car, he has money to burn.

My heels are skyscrapers, and everything I’m wearing is either too short or too tight to facilitate running—the Sex Toy Warehouse uniform is supposed to be sexy, aka revealing—so I awkwardly jog the rest of the way while trying to get the key to the shop out of my pocket and not drop my shawarma. The manager gave me my own set since I frequently open the store.

“Sorry to keep you waiting; plastic dicks don’t quite cut it for lunch.” Inwardly I cringe, because seriously, why did I say that?

“I would imagine they’re not all that satisfying,” he replies in a deep voice that would probably sound good whispering naughty things in my ear.

I’m not sure if he meant that suggestively or not. Regardless, I walked right into that one.

I finally look up. Dear sweet Jesus on a cloud of marshmallows, this is my lucky day. The suit is gorgeous. Like the kind of hotness that sucks the breath right out of your lungs and sends all the blood in your body rushing between your legs. It’s a good thing clits don’t react like penises, otherwise mine would be hanging out of the bottom of my shorts with excitement. I’m thankful my physical reaction is limited to damp underwear and tingles.

His dark hair is straight and cut short, parted at the side and neatly styled. He’s a cross between a mobster, and a fifties movie star. Capone and Ward Cleaver rolled together and dipped in lust. His nose is straight, lips are full, and he’s got a chin that looks like it could cut glass. His features are strong, but he somehow manages to be boyish even though everything about him screams pure, undiluted masculinity.

His tongue drags across his pillowy bottom lip and his throat bobs. I lift my gaze and meet his eyes. They’re a strange color. Not brown, not green, but some kind of honey-lemon color, ringed in emerald. Like a cat maybe.

Read the rest of Chapter One 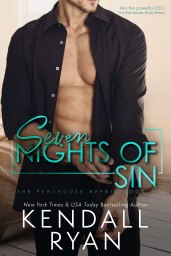 He’s the powerful CEO. I’m the know-it-all intern.Things went further than they should have, but I don’t have any regrets. Well, maybe just one . . .

I went and did the one thing he told me not to–fall in love with him.

Now I have seven days to prove my trust and devotion. Turns out money is a powerful drug, but love is even more addictive.

Seven Nights of Sin is the stunningly sexy and heart-tugging conclusion to The Two Week Arrangement.

CATCH UP ON THE DUET  WITH THE TWO-WEEK ARRANGEMENT 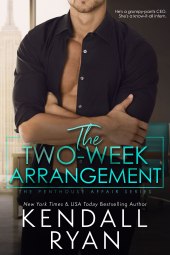 I know you don’t particularly care that I’m the CEO of this company, and you’re just an intern. I also know you’re not impressed by my power or my wealth, and that’s fine.

You think you’ve got me all figured out from working alongside me for two weeks, but you don’t know me. Not really.

You don’t know that I’m a single dad to twin toddlers, or that those two little girls matter more to me than this entire hotel chain.

I’m not interested in starting something deep and meaningful, but what I am interested in is the way your body reacts to mine when we’re in the same room. You probably assume the concentration on my face is work-related, when in reality, I’m figuring out which I want more–to nail you against the wall, or to bend you over my desk.

While you’re too disciplined to act on it, I’m not. And the night you stepped into my limo, all bets were off.

A New York Times, Wall Street Journal, and USA Today bestselling author of more than three dozen titles, Kendall Ryan has sold over 2.5 million books and her books have been translated into several languages in countries around the world.

Her books have also appeared on the New York Times and USA Today bestseller lists more than 70 times. Ryan has been featured in such publications as USA Today, Newsweek, and InTouch Magazine.

She lives in Texas with her husband and two sons.

Visit her at www.kendallryanbooks.com for the latest book news, and fun extras.