Today we are delighted to be sharing the sexy cover for Sarina Bowen’s all-new sports romance stand-alone in the Brooklyn Bruisers series,
SUPERFAN, coming 25th June.

Sometimes lady luck shakes your hand, and sometimes she smacks your face. Sometimes she does both on the same day.

Three years ago I met the most amazing woman. We were both down on our luck. Then I got that call—the one that tells you to get your buns on a plane to go meet your destiny.

But the girl was left behind. I didn’t have her phone number, and she didn’t know my real name.

While I became a professional hockey player, she became a superstar, with platinum records and legions of fans. And a slick, music producer boyfriend who treated her badly.

But fate wasn’t done with us yet. When Delilah turns up at a hockey game, I can’t resist making contact. The internet swoons when I ask her out on a date.

She might not remember me. But her jerkface ex does. He’ll do anything to keep us apart.

Good thing athletes never give up. This time I’m playing for keeps.

Be the first to read! Three winners (US or Canada) will win early signed paperback copies of Superfan!


“Would you like a beer?” the cute bartender asks me.I glance at the pile of mint leaves on his cutting board and hesitate. “Sure,” I say. But the mint looks so fresh and pretty.“I could make you something different.”

When I look up to flash him a smile, my heart does a little somersault. Those kind eyes are smiling at me, too. “Thank you,” I whisper.

“It’s really no problem.” He turns toward the beer cooler. “You’re an easy customer, trust me.”

But I really meant—thank you for remembering. As he leans down to grab a bottle for me, I find myself admiring the strong muscles in his back. Stop it, I admonish myself. It only gets worse when he turns around and places the bottle in front of me. I’ve never seen hands like his. I didn’t even know wrists could look muscular.

Even so. Ogling him is not why I came here. I pull out my keychain opener and remove the cap from my beer.

He discards it, gives me another pleasant smile and then picks up his paring knife again.

I take a sip, wondering when he’s going to mention my show at the Coconut Club. He was there. I saw him.

He separates some mint leaves from their stems and says nothing.

I last about seventeen seconds. “Well?”

“Jesus lord.” I close my eyes and then open them again. This is not going how I’d hoped it would. “What did you think?”

“Of…?” His amazing eyes are studying me.

“Forget I asked.” I take a swig of beer.

“Think about what?” He pushes the cutting board aside, and his smile turns knowing.

“My set at the Coconut Club! I saw you holding up that wall in the back. Don’t lie.”

He tips his head back and lets out a sudden laugh. “I’m so busted. I loved your show, but I didn’t expect you to spot me.”

“You loved it so much you weren’t going to say anything?” The sentence sounds crazy to my own ears. I put down the beer. “You know what? Never mind. I’m just being psycho right now. This town is getting into my head.”

“Listen, girly.” He braces both (muscular!) hands on the bar and looks me right in the eye. “I loved it so much that I don’t even know what to say about it. From that moment at the beginning—when you shut that asshole’s maw? To the part where you made a lady cry.” He shakes his head. “I couldn’t look away. And I never wanted it to end.”

I give him a slow blink, just trying to take that in. It’s so much more than I was even hoping to hear.

“Shit, Delilah. If that set doesn’t win you whatever contract you’re looking for, they don’t even deserve you.”

Something warm and unfamiliar settles into the center of my belly. “That might be the nicest thing anyone ever said to me. Which only means you’re still trying to get my phone number.”

He laughs immediately. “Can’t both things be true? Both my musical assessment and my interest in your evening plans?”

“Because you know so much about music.” I flip my hair and take another sip of beer.

“Look. I don’t know shit about music. But I know plenty about talent.” He leans down on a set of forearms I shouldn’t be noticing. “I know that talent sometimes takes a nap at just the wrong moment, but it never stays asleep for long. I also know that luck matters, too. If they don’t give you what you want, it won’t be your fucking fault.”

“Thank you,” I say quietly.

But he’s not done. “I saw something else valuable the other night. You’re good in the clinch. And that counts for double, I swear to God.”

“Yeah. You’re not just good at practice.” He pauses, wrinkling up his interesting nose. “What word would a musician use? Okay—you’re not a rehearsal musician. That stage was like your home. Either that or you fake it really well. That’s going to pay your rent someday, I promise.”

“Wow.” It’s like he looked right into my terrified little soul and found the very thing I needed to hear. Those beautiful eyes of his are practically burning me right now, so I have to look away. “Thank you. Really. I really needed that pep talk.”

I make the mistake of looking up at him again, and, for a split second, I see pure yearning. It’s like our souls vibrate at exactly the same frequency. And I have no idea what to do with that. Today we are sharing the exciting news that the CUPCAKES series by Bethany Lopez is now available in KindleUnlimited! You can also get the first book in the series, Always Room for Cupcakes, free right now! Grab the series while you can!

Get ALWAYS ROOM FOR CUPCAKES now for FREE!

Get CUPCAKE OVERLOAD in KindleUnlimited

Get LEI’D WITH CUPCAKES in KindleUnlimited

Get CUPCAKE EXPLOSION in KindleUnlimited

Get LEI’D IN PARADISE in KindleUnlimited

Bethany Lopez is a USA Today Bestselling author of more than thirty books and has been published since 2011. She’s a lover of all things romance, which she incorporates into the books she writes, no matter the genre.

When she isn’t reading or writing, she loves spending time with family and traveling whenever possible.

Bethany can usually be found with a cup of coffee or glass of wine at hand, and will never turn down a cupcake!

Heir apparent to her father’s company, Lizzy Banks needs a man. The perfect man. But when the rich “fundbabies” she usually rubs shoulders with prove impossible to hire, she takes a chance on a raw beast of a man salvaged from the wreckage of a bar brawl.

James Rowan earns a modest income as a YouTube daredevil, but he can’t refuse Lizzy’s million dollar deal. As she polishes his rough edges, creating a sophisticated gentleman fit for the highest circles of society, not only does she bring out the perfect man—it’s like she’s making the man of her dreams. How can she resist?

Though Lizzy loves seeing James in his clothes—and out of them—he isn’t the kind of man you bring home to Daddy. Her father’s disapproval and the pressure of the campaign have her eyeing the straight and narrow, but Lizzy’s finding it awfully hard to resist the devil on her shoulder…

Download your copy today or read for free in KindleUnlimited! 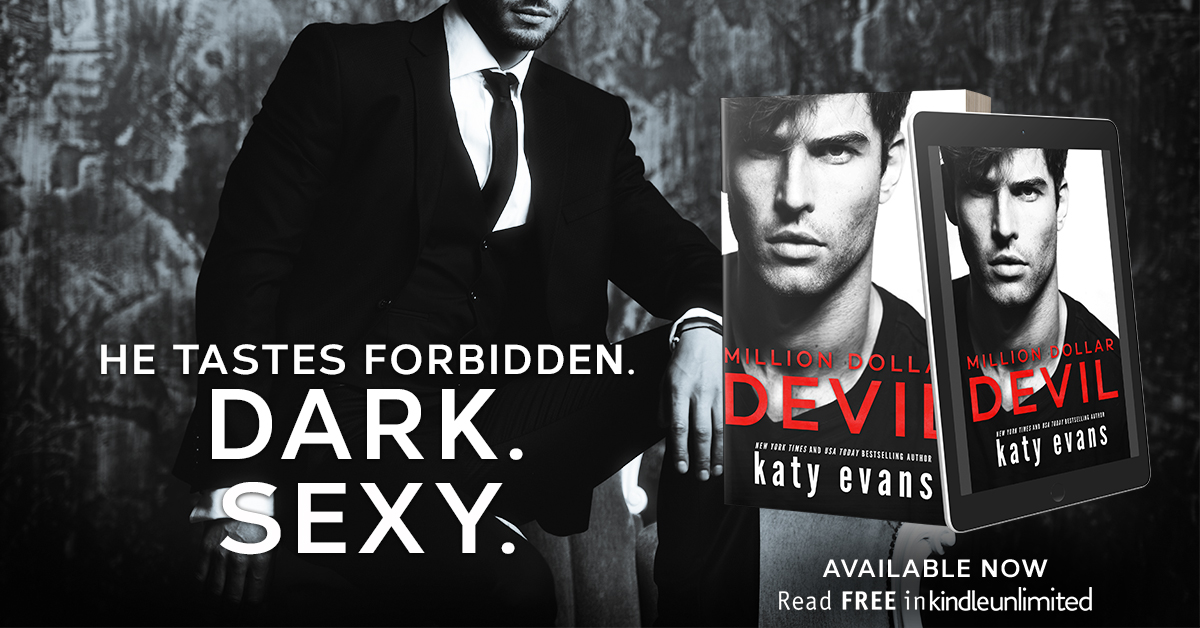 He has a face that—until now—only existed in my dreams. Hard jaw, chiseled to perfection. Firm, plush, kissable lips. Sharp, pristine blue eyes that feel like lasers zeroing in on me. He catches my gaze, and the devil’s smile suddenly playing on his lips is worth a million bucks.

That’s exactly how much it cost me. What this guy cost me. I would’ve paid so much more.

It’s like he’s the only man in the room. Like he belongs here. Confidence oozes out of his every pore. Masculinity envelops him as perfectly as his custom black suit. He walks like he owns the place. My heart beats harder and harder for him.

I can’t believe I got him to agree to this.

Women are vying for his attention. His moves are smooth. Sophisticated. Elegant.

He takes the notepad and pen she extends and scribbles his name, his voice low and rough. “There you go.” Beneath all that polish is his raw masculine energy. The determination that brought him here.

He looks at me. A thousand words lingering in his look. “I know.”

But does he? I’ve fallen in love with my own creation. I polished a diamond, and now it’s flawless. Perfect. But it’s not mine to keep.

He is not mine to keep.

This elite world he’s about to join isn’t one he was born into. These fans only know him because of me. His place at the top? That’s not where I found him.

Katy Evans is a New York Times, USA Today, and Wall Street Journal bestselling author. Her debut REAL shot to the top of the bestselling lists in 2013 and since then 9 of her titles have been New York Times bestsellers. Her books have been translated into nearly a dozen languages across the world.