We are thrilled to be on tour with
USA TODAY BESTSELLING AUTHOR Sydney Jamesson’s all-new psychological suspense novel,
THE DARKEST CORNERS

Check it out and grab your copy for ONLY $2.99 special release week price!

This standalone novel is not a romance. It is psychological suspense with a complex love story woven through it. Expect lots of angst, emotional scenes and edge of your seat suspense as a single father and a troubled young woman confront their deepest, darkest fears together.

After surviving a life changing event, celebrated artist Maxwell Grant has not touched a paintbrush or a woman in four years. During that time, he has tormented himself over an unspeakable act he dare not admit to, even to himself.

His one chance at redemption comes through a journal left behind by Harriet Harper, a mysterious woman in his night school class.

Shocked by what he reads about her tortured existence, he becomes obsessed by her and falls headfirst into a dangerous game of he said, she said, not knowing who to believe—who to trust.

When a dangerous character from Harriet’s past appears, events take a turn for the worse and he must say and do whatever necessary to save his sanity and, more importantly, his four year old daughter, Poppy.

Some secrets never get to see the light of day; others are just waiting to be uncovered … with shocking consequences.

The Darkest Corners is now available with all fine retailers at the special release week price of only $2.99!


~~ Alone and grieving, I considered allowing Hope’s parents to take care of Poppy, to raise her as their daughter. Seeing her there in the hospital so helpless, a small, motherless bundle, terrified me. I could have walked away.
I did not.
Almost four years ago, I had to dig deep, contain the fear shredding my confidence and get through, because some days that’s all it was—getting through.
During that first month when I’d held Poppy in my arms, I trembled, so scared I would drop her, feed her the wrong formula, dress her too warmly… and changing those nappies! Jesus Christ! The bloody smell had me keeling over.
Some days I fell to my knees, overwhelmed by what could only be described as a baptism in fire. But I’d do it all again in a heartbeat. I made the right decision, the only possible decision any father could make—to raise her as best I could.
Harriet also ventured into the unknown. It takes a special kind of fear to force a person to leave behind what they once loved the most; to consider the unknown a better option than facing up to what you have come to know as your family.
I had to know why.
I kicked off my jeans, my T-shirt, and climbed into bed.
It was going to be a long night. ~~


It was either switching the light off and getting through the following day wondering how The Darkest Corners would pan out or reading it through the night. I chose the latter and had no regrets over lost sleep. Left speechless, hopefully I’ll be able to put together a few coherent words for this page-turner of a psychological thriller which isn’t just gripping as it is heart-stopping. My advice. Don’t let this stand-alone slip under your radar and starting it in the evening is at your own risk. Why, you might ask? This must-read that left me guessing throughout is deeply absorbing and the characters so complex, I felt as if my reasoning was being tested! In a nutshell, my thoughts were all over the place when I finished and I couldn’t have been more awake.

Ooh boy, did Maxwell Grant fool me or what! In fact, the sad part was he’d been torturing himself for four years. Successful artist and single dad, he’d lost his art mojo and hadn’t touched a paint brush since a traumatic happening caused a loss of interest in just about everything. Even his lively daughter couldn’t get him out of his slump. Then a finding piqued his curiosity. What he did with it I’d define as a tad stalkerish, invading the privacy of someone who seemed to me to be a victim, perhaps survivor would be a better word. Was I off the mark though? Well, what I read devastated me and although him intruding didn’t feel right, it was by no means malicious. And I was still no nearer the target.I liked Max a hell of a lot, felt awfully sorry for him and in spite of the fact that he doubted his parenting which to my mind of thinking, was more than adequate, his relationship with Poppy simply melted my heart. An endearing child if ever there were one, her delightful quirks not only lightened up the story but also made me grin from ear-to-ear. The detail used in her persona is nothing less than outstanding. Poppy’s mannerisms; her giggles and chatter, her dress and footwear sense literally bowled me over.

Max’s best friend gave him a warning. He’d either have to stop being impertinent in art class and offer his students words of encouragement or lose his job. Making an effort to change his attitude was positive all round. There was a stirring of excitement in the classroom, I enjoyed his well-thought-out remarks, observing how his social skills improved and honestly thought Max’s life was taking a turn for the better. Wrong again! This would be the beginning of an emotional and painful rollercoaster ride of deceit, a loop of lies entwined in the darkest corners of betrayal.

Harriet/Harry Harper. Hmm…to the likes of me and definitely Max, she was that ray of sunshine missing, what he needed and been waiting for. But at times, pieces of her puzzling past didn’t quite ring true with me. That shouldn’t have been so because she gave me no cause to think otherwise. Perhaps it was me being too impatient since spending time trying to suss out plots is my thing. I have to say I had no problems connecting with this outgoing, attractive gal trying to get on in life. I felt she deserved the best; however, wait for the bombshell…the drop literally floored me. And get this. The least of the author’s intentions were letting her readers off easily and she complicated matters more with revelations I, for one, never saw coming! The cadence of the story changed its rhythm; had me sitting on the edge of my seat, figuratively speaking of course, and the incredibly visual narrative made me gasp into my pillow.

The author’s created superb characters, her storyline which is masterfully paced (skipping a sentence or two won’t even cross your mind), is unique. Told in first-person past tense, you’ll be in for a surprize regarding the narrative, too. She’s laid down a solid foundation in the first half a dozen chapters; hence, the lack of dialogue in them. It wasn’t missed at all, the rest of the book giving me enough to get myself totally lost in the players’ words. The further I got into the story, every layer revealed had more depth with even more intrigue, and I can’t tell you how enthralled I was by it all. Therefore, I can safely say that this read is the best thriller I’ve read this year. And why I hadn’t discovered Jamesson’s writing before is beyond me. Bravo!

5 Stars ~ Reviewed by Donna on behalf of KFF


Due to surviving a life-changing event, budding artist Maxwell Grant hadn’t picked up a paint brush or engaged with another woman for the past four years. What had happened caused him to live in torture, but then a conflict of wills begins when he finds a journal belonging to Harriet Harper, a woman who attends his night school class.

Max battles with the idea of reading the journal or handing it back to Harriet, but his curiosity wins and what he reads has him so shocked that this woman has endured so much in her life. Getting close to her by the words written has him developing feelings for her, which could be a dangerous game. The one thing Max must do is make sure lines don’t get blurred and ensure that his 4-year-old daughter, Poppy is protected. When a dangerous character makes an appearance, it is a game of cat and mouse. Who is telling the truth and will Max be able to handle a very difficult situation he finds himself in?Max is a very complex character and once I started peeling away his the layers, I found myself being drawn to him and his wretchedness. The relationship he has with his daughter was a very sweet and Poppy is a very cute little pink princess. She clearly loves her daddy to bits and also she seems to connect to Harriet which was really endearing. Harriet was very hard to read. I was quite intrigued by this mysterious woman and desperate to see where this was all going to lead to.

The writing throughout was exquisite and I couldn’t put this book down. Also, I urged a book buddy to catch up with me as I needed to speak to somebody about this story. The twists and turns had me gasping and saying oh my goodness through most of the chapters. I would read a part and think I knew where it was leading to only to be thrown of course and discover it was something I never saw coming. The suspense is so thrilling, and I found myself shouting at my kindle as if I was in some sort of car crash that was going in slow motion. I couldn’t believe some of the choices Max was making and all the time I kept thinking about the effect his actions would have on Poppy.

Even if you have never dipped your toe in this genre. I would highly recommend that you do. Personally, I love psychological suspense stories, and nobody will be disappointed with this story, especially if your heart melts at a single father with such a cute daughter who will touch your heart from the first page of their interaction. To sum up; heartfelt, dramatic, scary and romantic, I haven’t stopped thinking about The Darkest Corners since I closed on the last chapter. 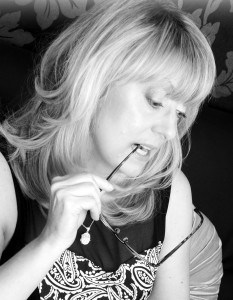 Sydney Jamesson is an English teacher by day and a USA Today bestselling author of romance, suspense by night. She is nocturnal by nature and loves nothing more than staying up late, listening to music and being inspired to write. She has always scribbled things down; in her home is one enormous waste paper basket full of discarded phrases, opening lines and pieces of dialogue that have hit her like lightning in the middle of the night or whilst parked up at a set of traffic lights. Her bestselling trilogy, The Story of Us is available worldwide, and she has been thrilled to continue Ayden Stone and Beth Parker’s epic love story in The Story of Us Series: Into the Blue, comprising: Blue Genes, Blue Hearts, Blue Moon. More recently, Sydney has focused on psychological suspense.

THE DARKEST CORNERS is a complex love story filled with lots of angst, emotional scenes and edge of your seat suspense as a single father and a troubled young woman confront their deepest, darkest fears together.

Need to chat about the book?
Join The Darkest Corners Collective on Facebook TODAY!