Here’s a tip: When you least expect it, expect it.

I’d been known to have my share of beautiful women. Usually, I met them in a bar, through a mutual acquaintance, or even when photographing them.

Imagine my surprise when a gorgeous blonde drove her car into mine on the way to a party.

No more than a minute after our run-in, a string of colorful words flew from her mouth in rapid fire.

Unexplainably, the angrier she became the harder I got. All sorts of scenarios played in my head of how I could get her to shut up. I was all for feisty women, but I preferred leaving that for the bedroom—not on the streets of New York.

When I learned she was a school teacher, that worsened my disposition. What man didn’t have a dirty teacher fantasy at one point in his life? I decided it was my turn to teach her a thing or two… or so I thought. Little did I know, Miss Prim-and-Proper would turn the tables on me.

She called me Mr. Kinky, and that was fine with me.

Start the Series of Standalones today!

Another great story from this writing duo. A light hearted romance with just the right amount of zing,.or should that be HOTNESS? This book revolves around two main characters, Cassie and Dante, but there are characters in this book that we have met before as this is book 4 of the Wrong series.

Dante is tall and devilishly handsome and a very talented photographer. Photography is his life and passion and he is extremely good at it. What starts out as just a normal day turns into something else entirely.

Cassie is a Kindergarten teacher who loves her job and surrounds herself with her friends. One of them being her best friend Luca and as luck would have it, is dante’s brother.

When Cassie and Dante first meet, it’s not love at first sight its the crunching of metal. In other words, her car and his cab ride.A disaster that was just waiting to happen. He said, she said, who was to blame? The cab driver or her. No one was giving an inch, both being as stubborn as mules.

Their first meeting was obviously memorable as neither one could stop thinking about the other. This was the beginning of their love story. Their courtship was pretty straight forward but the insecurities Cassie felt due to the nature of dante’s work was evident in the story line. Photographing beautiful women. Would the love of a good man put those insecurities to bed, or would this be the shortest romance in history?

Reading this light hearted romance and getting to know and like the characters in this book you desperately wanted this couple to get their happy ending. Would they? New challenges arise which makes them both question where this new development will take them. As we all know, true love never runs smoothly.

I take my hat off to both authors and must say how well they both compliment each other in their joint writings. As with the previous books leading up to this one, the story flowed continuously and was perfectly balanced. I were constantly wondering what was coming next, in and out of the bedroom. Ha ha! You both had me craving a Mr Kinky of my own! Congratulations ladies on a well deserved 5 stars.I look forward to reading more of your work.

If she wanted to play, I’d play. The tiny black fabric perfectly highlighted the curves of her ass as she ran ahead of me. When she craned her head back to see how far behind I was, her tits looked as though they were ready to escape the scraps shielding them.Her laughter sounded like a melody as she made it to the deck stairs. It would have been easy to catch her, but seeing Cassie carefree and playful was worth her thinking she’d bested me.When we were both standing next to the pool, breathing heavy, her a little more winded than me, she snapped my picture. “How does it feel?” she said with friskiness before bringing my camera to her face again for another shot.

Glancing down, I spotted her book. There was no way she could grab it before me, unless she dropped my camera, which I knew, or hoped, she wouldn’t do.

Cassie’s eyes narrowed as I opened the page just before her bookmark. “Ahem.” My eyes scanned the words, and I couldn’t help but grin. Was this the stuff she was into? Who knew?
“Here,” she said with a nervous voice, and extended my camera toward me. “Take it and give me my book.”

“No way, this is too good.” Cassie’s glare turned into a wide-eyed look of horror. “Ethan pushed my body over the edge of his expansive desk, forcing papers to fly to the floor. Heat pooled between my legs, wetness coated my panties as my boss shoved my skirt up to my waist. With gentle force, he grabbed my wrists in his hand before the cool metal of cuffs bound my arms together.” I glanced up, and Cassie’s face was beet red, but I continued. “The thought of getting caught by another employee should have scared me, but instead, it thrilled me. I knew of Ethan’s history, his love of BDSM, and if that’s the way he wanted me, then that’s what I would give him. His deep voice rumbled, ‘I’m going to fuck you like you’ve never been fucked. Spread your legs and show me how wet you are… ’” I arched a brow and looked at Cassie. “Wow, Ethan’s a kinky fucker.”

She reached forward, offering me my camera. “Can I please have my book back?”
“Will you let me take a picture of you?”

She let out a resigned sigh. “Okay, if you stop reading.”

Once we made the swap, my camera for her romance novel, she crossed her arms in front of her chest while still hanging on to her book. “How do you want me?”

“That’s a loaded question, but for now set the book down and lie on the chaise.”

A.M. Madden is a USA Today bestselling published author with Loveswept/Random House as well as Ever After Romance.

A.M. is a wife, a mother, an avid reader of romance novels, and now an author.

A.M. Madden is the author of the popular Back-Up Series, as well as several other contemporary romances. She is also a published author with Loveswept/Random House.

Her debut novel was Back-up, the first in The Back-Up Series. In Back-Up, A.M.’s main character Jack Lair caused readers to swoon. They call themselves #LairLovers, and have been faithful supporters to Jack, as well to the rest of his band, Devil’s Lair.

A.M. truly believes that true love knows no bounds. In her books, she aspires to create fun, sexy, realistic romances that will stay with you after the last page has been turned. She strives to create characters that the reader can relate to and feel as if they know personally.

A self-proclaimed hopeless romantic, she loves getting lost in a good book. She also uses every free moment of her time writing, while spending quality time with her three handsome men. A.M. is a Gemini and an Italian Jersey girl, but despite her Zodiac sign, nationality, or home state, she is very easy going.

She loves the beach, loves to laugh, and loves the idea of love.

Joanne is a mother and wife and loves spending time with her family. She’s an avid sports watcher and enjoys the occasional round of golf.

Joanne loves to write and read romance. She believes everyone should have romance in their lives and hopes her books bring joy and happiness to readers who enjoy modern day fairy tales and breathless moments.

She is an independent romance author and has written several contemporary romance novels, including The Prescott Series, Ryker, A Heart’s Forgiveness, The Critic and The Chance series.

GUILT, a psychological thriller by Amanda Robson is now available in paperback in the U.S and the eBook is ONLY #99pennies for a short time on all Amazon platforms!

Your sister. Her secret. The betrayal.

When the body of a woman is found stabbed to death, the blame falls to her twin sister. But who stabbed who? And which one is now the woman behind the bars?

Zara and Miranda have always supported each other. But then Zara meets Seb, and everything changes. Handsome, charismatic and dangerous, Seb threatens to tear the sisters’ lives apart – but is he really the one to blame? Or are deeper resentments simmering beneath the surface?

As the sisters’ relationship is stretched to the brink, a traumatic incident in Seb’s past begins to rear its head and soon all three are locked in a psychological battle that will leave someone dead. The question is: who?

This gripping new thriller is the hotly-anticipated second novel from one of our most exciting new writing talents. Amanda’s debut novel, Obsession, was a number 1 bestseller in the iBooks charts on its release in summer 2017, and went on to sell over 75,000 copies.  It became one of the UK’s bestselling psychological thrillers of the year, with the Daily Mail calling it ‘one of the most compelling debuts of the year.’

BUY THE EBOOK TODAY FOR ONLY #99cents! 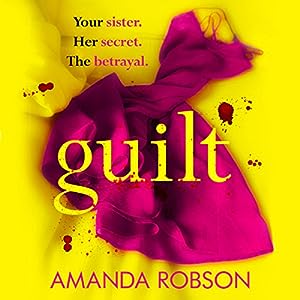 GUILT is now available on Audible

She presses a tea towel to her wound to try to stem the blood, but it is gushing, insistent. The harder she presses the more it pushes back. She cannot look at her sister, at her clammy, staring eyes. A siren grinds into her mind. Louder. Louder. Her eyes are transfixed by repetitive flashing lights. The doorbell rings and she feels as if she is moving through mercury as she steps to answer it. To open the door with a trembling hand – a hand that smells like a butcher’s shop. Three police officers stand in front of her: two men, one woman.

Click HERE for Anna’s review on behalf of KFF