We’re celebrating the release of THE REAL by Kate Stewart! 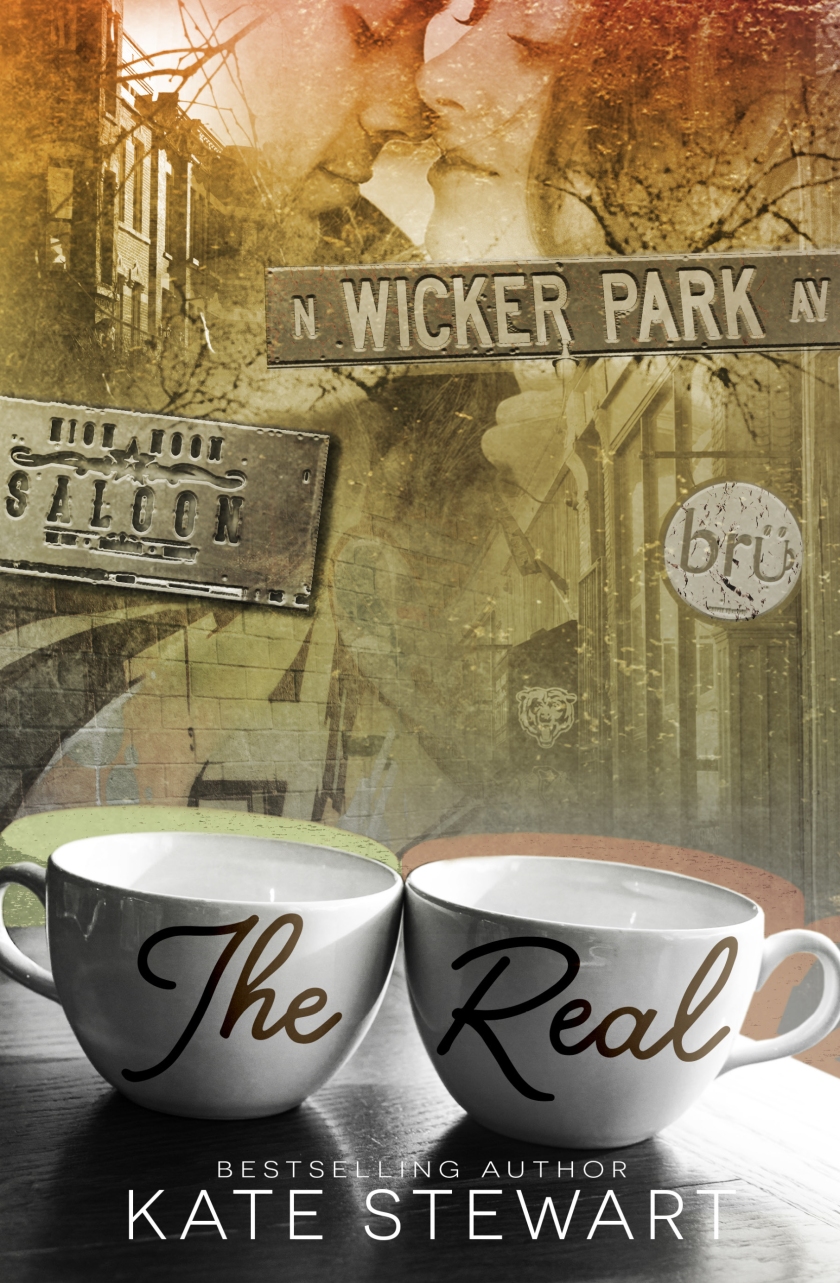 Add to your TBR!

They say it happens when you least expect it.

It did for me.

It started the moment I saw the simple message pop up on my computer screen:

And when I met the eyes of the gorgeous man messaging me from across the coffee shop, I never thought my reply would lead to the most intense, sexual, and passionate relationship of my life.

We both agreed to check our bags at the door and put our future hopes and aspirations on the table.

I fell in love with his no holds barred attitude, sexy smirk, and undeniably good heart . . . and for a while we forgot about our baggage. We happily tripped over it to get to the other, neither of us willing to show the contents of our pasts in the off chance it could ruin us.

We built our love on a foundation of gray.

It was life in black and white that threatened to tear us apart.

THE REAL by Kate Stewart is now AVAILABLE!

Cameron’s Mac: Hi.
I looked above my laptop and took a deep breath before I accepted his invitation.

Cameron’s Mac: I saw you with the homeless guy.
Abbie’s Mac: Ok?
He took a sip out of his Real Men Love Pomeranians mug and shrugged before he typed.

Cameron’s Mac: So, that was nice of you. Most people in the city just walk on by.
Abbie’s Mac: Oh. Most people do walk past Bennie. But he’s different and I’m not most people.
He lifted a brow and bit his lip.

Cameron’s Mac: I see that.

Cameron’s Mac: Want to have your next cup with me?
Say yes, say yes! It’s only coffee!
Abbie’s Mac: No, thank you.
You idiot.
His brows drew tight with his frown.

Cameron’s Mac: Sure? How about some breakfast?
My pulse raced with the memory of my last reaction to that type of attention and the consequences, and I answered without another thought.

Abbie’s Mac: No, thanks.
His chuckle was deep and covered me, even across the space between us. He bit his full bottom lip as he typed, his smirk still intact.

Fuck. Me. Damn it, Abbie!
Cameron’s Mac: Well, I guess today is not my day.

Abbie’s Mac: That’s all you’ve got?
I had no clue why I sent that message . . . why I was bothered that he didn’t try harder. Just that fucking smirk. It was sexy as hell.

He read my message and shrugged as he typed.

Cameron’s Mac: You seem to enjoy coffee. I don’t have an agenda. You’re beautiful, I noticed. I wanted to drink coffee with you. You said no. I’m going to scrape up the rest of my pride now and head out.
He closed his laptop and stood while I deflated. Damn it. He was being nice. Since when are guys just . . . nice?

Am I a man hater? Have I become that woman?
I spoke up as he slipped his computer into a worn leather bag.

“I’m sorry,” I offered in quick apology. “I was expecting some horrible line or screwed up proposition. The web, messaging, anything that has to do with technology has been hazardous for me. I’ve seen enough unsolicited dick pics for a lifetime. I was just being cautious.” And that was the truth. But I’d said it aloud in verbal vomit. Did I really say “dick pics” out loud?

He chuckled again as he looked down at me from where he stood, then grinned.

“Today isn’t the right day.” The husky baritone of his voice matched the silky hue of his eyes, which seemed to darken as he looked me over.

“No?” I asked in a whisper as I sized up his six-foot-plus frame and imagined the possibilities.

“No,” he said. “Maybe we can not have coffee again sometime?”

He’d tapped out with a simple ‘no’ from me. He couldn’t have been that interested in the first place.

I couldn’t deny the disappointment welling up in my ovaries.

“Okay.” I lifted the last syllable when he didn’t press further.

Cameron pulled out his wallet and set some money on his table then walked over to mine and did the same.

“At least let me buy your next cup.”

After setting the bills down, he stood over me briefly and I caught his scent—purely masculine. I inhaled as much as I could without being obvious. He didn’t smell like a psycho.

Cameron picked up his man–bag while I pictured running my fingers through his messy, inches thick, dark-brown hair.

“Yeah, see you. And thanks,” I said to his retreating back, an octave louder than necessary. “For the coffee,” I added. Outside the window, Cameron bent and exchanged words with Bennie before sticking some cash in his hand.

Well, Abbie. Guess you’ll just have to wait until the next time you roll out of bed and a beautiful man hits on you. Should happen again, you IDIOT!
Once again, my hesitance had cost me. And I couldn’t help but feel like this time it cost me big.

Sagging into my seat, I continued to stare in his direction, watching those broad shoulders walk out of my life.

Kate Stewart lives in Charleston, S.C. with her husband, Nick, and her naughty beagle, Sadie. A native of Dallas, Kate moved to Charleston three weeks after her first visit, dropping her career of 8 years, and declaring it her creative muse. Kate pens messy, sexy, angst-filled contemporary romance as well as romantic comedy and erotic suspense because it’s what she loves as a reader. A lover of all things ’80s and ’90s, especially John Hughes films and rap, she dabbles a little in photography, can knit a simple stitch scarf for necessity only and does a horrible job of playing the ukulele. Aside from running a mile without collapsing, traveling is the only other must on her bucket list. On occasion, she does very well at vodka.