From USA Today bestselling author Meghan March comes the final sexy standalone set in the Beneath world of New Orleans.

I used to believe there were lines in life you don’t cross.
Don’t lie. Don’t cheat. Don’t steal.
Until I learned people don’t always practice what they preach.
I turned in my badge and gun and walked away from everything.
Then I got the call no one wants, and I’m back in New Orleans.
What I don’t expect is for her to be here too.
Another line you don’t cross?
Don’t touch your best friend’s little sister.
She’s always been off-limits.
Too bad I don’t follow the rules anymore.

Reviewed by Klaire Sutherland on behalf of KFF

Can most definitely be read as a standalone even though it is book number seven of the Beneath series, the last book. There is a part at the end of the book, the epilogue, which gives the rest of the couples throughout the series, their own little parting gift to the reader, which just might be considered a bit ‘spoily’ in terms of the rest of the series. I thank Meghan for this, perfect way to round up a series. Otherwise, jump right in…Beneath the Truth is a fantastic book to while away the hours with. I’ve always enjoyed Meghan March’s work, out with this series too, I know I’m getting a good when I pick up one of her novels. This is no exception.

Beneath the Truth has a little mix of everything. All the emotions are there – from the heart pumping adrenalin spikes within explosive scenes, to the little barbs of fear you feel when navigating the story. An easy tale to climb on board with and stay the course, it’s far from mediocre storytelling. The author threw in some complex twists that most readers won’t see coming but that’s not to say the story isn’t a dream to follow along.

Rhett Hennessey is no stranger to the Beneath series and this is the perfect homage to the man – the last one. He was always a bit of a mystery and I know many a reader desperately wanted this book. I’ve always liked him when I’ve met him and his background is extremely sore in terms of family and profession. I didn’t see Rhett as the larger than life ‘alpha’ man that perhaps other did. I felt he always kept his wits about him (understandably) and never got too big for his boots. I loved the couple story in this, and I felt it was written with realism. Here we have mousy little Ariel, Heath’s sister, coveting her brother’s best friend from afar. And for a very long time. Except when both return; Ariel isn’t so mousy anymore. Lord, I thought Ari was brilliant. She had an absolute heart of gold which shone so bright. Character development for both were great, albeit I felt they were a little full on a bit quick (this is a personal preference), not so much with the sexual scenes but more so declarations and such things. Together they light up the room, yin to yang. No questions asked. Secondary characters were fantastic and fitted the story well. Meghan March makes you care about her people, she always has. Beneath the Truth is no different.

It hasn’t quite been a five-star read for me. I had one or two niggles, like the brothers popping in and out, the cartel side to the story I felt was a tad underdone and wasn’t up to its full potential. And a silly thing really. This is the end of a series and I wish the author would have left it that way. There is reference to a couple of characters towards the back end of the book which are to be the first of a new series. This is common knowledge but I wasn’t a fan of them being there. I think if you’re going to finish a series – finish it. Period. Start a brand new one. Don’t introduce to me to anyone, let me go all in to a new series with no preconceived ideas please.

Hey – I’d recommend this and the whole series. It’s a joy of a read from start to finish, book one to seven. Don’t miss it!

Wham. My heart slammed against my ribs as it sped up about twenty beats per minute.

The heat and delicious woodsy citrus scent radiating from his body did good things to me. Things that made me want to do very bad things to him. I wasn’t a seventeen-year-old virgin anymore. I knew my way around a man, but I had to admit, the hipsters in Cali had nothing on a homegrown Louisiana man like Rhett.

When he spoke, he leaned in so close that I could feel his breath on my ear. “You missed that shot on purpose.”

My gaze jumped from the sexy five o’clock shadow shading his jaw to his piercing green eyes.

“Wha-what are you talking about?” I smacked myself mentally when my old stammer kicked in. Of course he would cause it.

“That shot. You missed on purpose. I saw you adjust at the last minute. Why?”

I swallowed the saliva pooling in my mouth and decided to take the safest exit from this situation. Lying.

His eyes narrowed on me. “You’re lying and you’re terrible at it, just like you’ve always been.” He reached up and pressed his thumb to my left eyebrow. “You get a twitch right here.”

Oh my God. Rhett Hennessy is touching me. And what’s more . . . he knows my tell. He noticed me!

The fifteen-year-old inside me did a terrible cartwheel at the realization. Okay, more of a round-off. With a tumble in the grass to finish. Whatever.

But outwardly, I was trapped in that green gaze until he decided to let me go—or until I came to my senses.

I cleared my throat and sidestepped him. “Whatever you say, hotshot. I need another drink.”

Focusing on putting one four-inch heel in front of the other without biting it, I escaped to the table and reached for the whiskey glass I’d left behind, interrupting my brother and the waitress. They both stared at me as I chugged the contents.

I’d always wondered what it would feel like to have Rhett’s attention, and now I knew. In a word, it was . . . unnerving.

“Fine.” Keeping my answer short meant he couldn’t tell that I was lying. Heath wasn’t nearly as observant as Rhett.

Thanking the Lord that Heath obviously hadn’t been watching, I shrugged. “I guess.”

He glanced toward Rhett and then back to me. “The sister I know and love doesn’t lose at pool. Ever. Even to Rhett Hennessy.”

I lowered the glass to the table and straightened my shoulders. “Like they say, things change.”

He nodded slowly. “That may be true about most things, Flounder. But you’re a pool shark and we both know it.”

Before I could respond, Heath’s attention jumped back to the waitress. I took another ten seconds to gather myself, also known as drinking offensively in my mind, before I crossed the floor to face off against my former obsession.

“You all right, Red?” Rhett asked.

“Don’t call me that. And I’ve never been better.”

His gaze dipped to my feet and dragged up my body. “I can agree with that statement.”

Whoa. Who is this guy with the innuendo? A glance at his empty whiskey glass told me he was drinking heavily as well. Was this the booze talking? Or was Rhett Hennessy not just noticing me, but noticing me?

“Your turn, hotshot. Better not miss, because I’ll clear the table next time,” I said, but my cocky attitude backfired.

Rhett didn’t miss. He sank his balls and then the eight, ending the game almost as quickly as it started. He returned his cue to the rack and turned to face me, all traces of the earlier heat banked, his expression shuttered.

What the hell just happened?

Meghan March has been known to wear camo face paint and tromp around in woods wearing mud-covered boots, all while sporting a perfect manicure. She’s also impulsive, easily entertained, and absolutely unapologetic about the fact that she loves to read and write smut. Her past lives include slinging auto parts, selling lingerie, making custom jewelry, and practicing corporate law. Writing books about dirty talking alpha males and the strong, sassy women who bring them to their knees is by far the most fabulous job she’s ever had. She loves hearing from her readers at meghanmarchbooks@gmail.com. 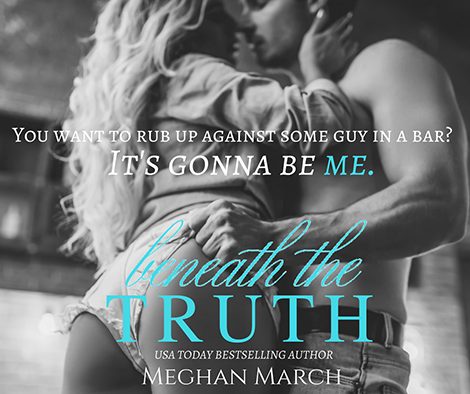