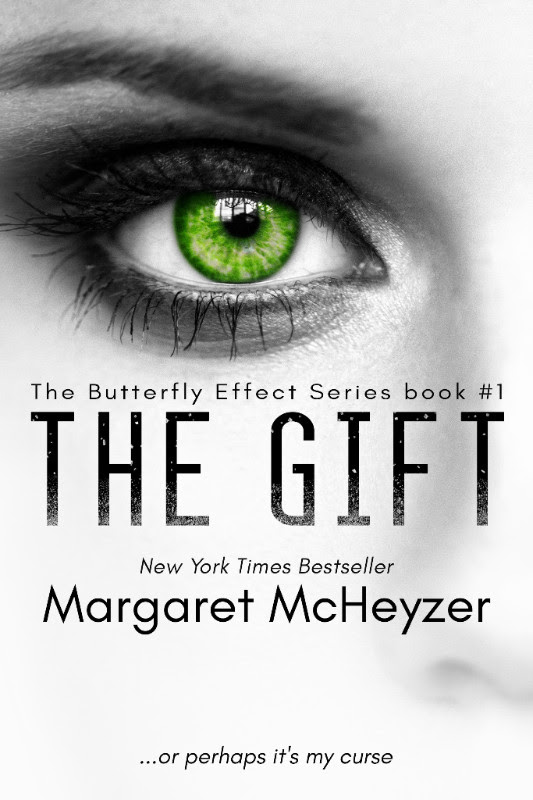 “They say the eyes are a gateway to the soul.  In this case, they certainly are.”

Alexa Murphy was a normal 17 year old girl until her appendix burst and she nearly died. When she comes too in hospital she discovers she has been left with an extra ability, the ability to touch people and see their futures. Lexi is a kind hearted young woman and she makes a decision that ends up putting her face to face with Jude Caley. Jude knows what she can do and takes her captive.  Ostensibly he claims it is to keep her safe, but that doesn’t stop him from using her as a human lie detector.

The relationship between Lexi and Jude is a highly complex one.  From the start of The Gift, Jude comes across as an uncaring.  I initially hated Jude and the way he acted with Lexi.  I found, however, at some point, and I can’t really say when.  I found myself feeling pity and sympathy for him.  It’s apparent he is hiding something from Lexi, and I really hope that is solved in the sequel The Curse. I enjoyed The Gift; it was a good start to the series which is why I didn’t really take it to heart when I found the book hard going in the first 15%.  I wasn’t completely hooked until I was at the halfway mark.

I don’t often read YA/NA books. I find them very hard to get into and even harder to relate to, but this was not the case when it came to The Gift.  I know I stated that this wasn’t an easy one at the beginning, but this has nothing to do with it being a YA/NA. It has more to do with the character and story build up being done in a way that I found staggered at times and once or twice was very slow or mundane. The Gift is the start of a series that could go anywhere. There were so many questions left unanswered.  I really am highly intrigued in where the author will take this plot. I just wish this book hadn’t ended on a cliff hanger.

**Write something worth reading**I’m Margaret and I’m a self-published author.

Recently I was fortunate in obtaining New York Times best selling status on my YA/NA book – Ugly, and my YA book – Mistrust.My last three books have been YA and I’m completely in love with the genre. I love being able to communicate with people through my words and stories.

My writing genres all differ, but the one thing I keep consistent is my heroines. All my female lead characters are strong, gutsy and not the ‘perfect’ woman. While my books all have romantic elements in them, they aren’t just about the romance. They’re about finding strength, acceptance and making life long connections.

I hope you enjoy my stories as much as I have while writing them.