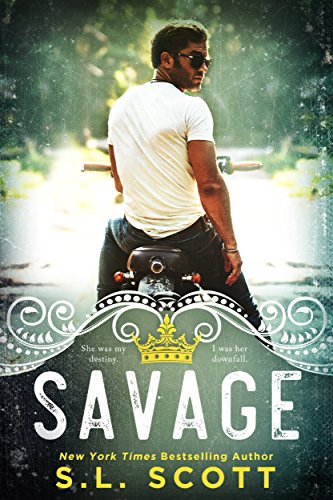 Welcome to the mysterious world of the rich and the damned in this gritty, modern day fairy tale. Two star-crossed lovers will either find their destiny or meet their fate in a world where demons come in the form of familiar faces and pawns aren’t just players, but deadly.

She was my destiny.

I was her downfall.

We were a match made in hell.

But when we were together, that hell was pure heaven.

The moment I laid eyes on her, I knew she would pay the price for my sins. I wasn’t much older than she was, but old enough to know better. Old enough to know she would be good for me and I was bad for her. But I pursued her anyway. Back then I had hope that maybe she could change my future.

Maybe together we could change our fate . . .

Reviewed by Tracey Lou on behalf of Kindle Friends Forever

S.L. Scott is one of my favourite authors and yet again did not disappoint. I was so looking forward to getting comfy, settling down and getting entirely engrossed in this story.

Alexander Kingwood but likes to be known as King. That title suits him well for someone so young. He is regal in his stature, commands respect and gains the attention of those around him by simply walking into a room. Rich beyond measure but not flashy with it is a bonus from my point of view. When he loves, he loves with his entire being and the lucky girl that is the recipient of his devotion is Sara Jane.

Sara Jane. Beautiful, young and head over heels in love with Alexander. Still in school and studying hard but still finding the time to be with the one she loves. Their relationship is not all plain sailing. There are silences and absences that are unexplained. She may have been dating him for the last three years, but he has secrets and secrets that he is not willing to share. Sara Jane can wake up in the early hours of the morning  and find his side of the bed cold and empty. Where has he been? Has he been with someone else? All these questions are spinning inside her head and let me be honest, in mine too. Even though she trusts him explicitly, I don’t quite yet.

Alexander is afraid that by sharing his secrets with Sara Jane, he will either lose her forever or she will stay with him for all time. Alexander reveals his secret and she is left reeling from the information but it all comes down to one thing. She loves him and can’t be without him. Finding out the truth has a devastating effect on all of them and that includes friends and family. Traumatic events occur and some distance is needed and taken by Sara Jane, but along the way Alexander has gained some enemies that are never far away.

So on that note I bet  you are all wondering what the big secret is eh ? Read and you shall find. S.L Scott brings a story to life with her style of writing. It’s enticing and enveloping and feels so real. I really enjoyed this book and I did shed a few tears at the end that came with loud shouts of No, No, No.

I personally cannot wait for the follow up to find out what happens next with Alexander and Sara Jane. Totally deserving of the five stars I have awarded it, and congratulations S.L.Scott on a finely tuned and riveting read.

He moves with assurance, every step taken with purpose. When I met him, he oozed confidence, but I discovered that he didn’t know who he was. It was as if his mother’s death had caused him to lose track of himself. He made me feel safe and secure, taken care of, and loved. He was never unsteady around me. But I would catch him lost in his own thoughts when he assumed I was studying. I remember a night when music played softly in the background, a fire flamed in the fireplace, my books were scattered on the coffee table, and his room was dim with the heaviness of his mood, he stood in the open doorway that led to the balcony. The anguish seemed to cover him like a cloak, his shoulders sagging and his head seeming too cumbersome to hold up. Alexander leaned against the railing and closed his eyes . . .

“Kingwood Enterprises is the only thing left of my mother.”

“No.” He laughed, looking up at the night sky. “I’m all bad, just like my dad.” Glancing over his shoulder back at me, he sighed. “When are you going to see the real me, Sara Jane?”

“I see the real you every time I see you. This is who you are. I don’t know why you think you’re so bad when all I see is the good.”

With a smile on his face, he turns around, and crosses his arms over his chest. “You’re the smartest decision I ever made. You know that?”

“You’re so demanding when you get compliments.”

Hopping over the arm of the couch, he lands with a thud next to me sending my textbooks to the floor. “I do like it. A lot.”

That was a good kiss. A kiss that went from chaste to more in seconds. I still remember it so clearly.

Alexander may not have known who he was at the time, but he knew who he was going to be. I often wonder if it was a self-fulfilling prophecy or falling into a trap set long before he was born. There are a lot of ghosts haunting this manor and I don’t intend to let him be the next.

Tonight, his secrets are protected by a solid wave of muscle that rolls over broad shoulders, crashing down strong arms. I turn over to get a better look at him before he disappears outside. He’s been working out a lot more lately. He says it’s to get rid of pent-up energy. I think it might be preparing for battle.

ALSO AVAILABLE IN THE KINGWOOD DUET

Living in the capital of Texas with her family, Scott loves traveling and avocados, beaches, and cooking with her kids. She’s obsessed with epic romances and loves a good plot twist. Her favorite color is blue, but she likens it more toward the sky than the emotion. Her home is filled with the welcoming symbol of the pineapple and finds surfing a challenge though she likes to think she’s a pro.