You could think of these stories as ultra filthy, no strings attached one night stands – perfect for those times when you just want to have a damn wild, sexy time and then walk away slightly bow legged with a satisfied smile on your face.

Each story in the series is complete and unrelated to the next, a sensual lucky dip, because regular sex should never have to mean boring sex, right? In fact, the only thing that is regular about this series is that Kitty will release a brand new story EVERY Friday. A weekly dose, because, after all, regular sex is good for your health.

Perfect bedtime reading, or for commuting to work, or to spice up your lunchtime. Just make sure that no one is reading over your shoulder…

‘Is this seat taken?’
I look up, and just like that I’m done for.
‘Take me,’ I say, and then feel my cheeks glow, probably turning the same shade of dull ox-blood red as the faded upholstery of the seat he’s absently stroking as he watches me. He raises one brow a little as if he’s seriously considering my offer.
‘Take it,’ I correct myself and shoot him my best ‘aren’t I a goofy klutz this morning,’ smile, even though we both know that I’d meant exactly what I said, although it would have been wiser if the words had stayed inside my head. I’d just handed him the upper hand within three seconds of meeting him, a mistake I’d made several times before and vowed to learn from. That’s me all over though; keep on doing the same thing and expecting the results to be different, which even I can see is the action of an idiot.
‘I’m Stacy, newly crowned queen of saying the wrong thing at the wrong time,’ I say brightly, because he’s slid into the seat opposite mine and is still looking at me intently. His eyes are a curious sort of blue; they remind me of a pale turquoise cocktail I had on the beach in Ibiza last summer, or of soft, worn Levi’s begging to be unbuttoned by your lover.
‘Queen Stacy.’ He inclines his head formally. ‘I’m Jude, king of bad intentions.’

Click buy to find out just how bad Jude’s intentions are – if you need a hint, they’re VERY BAD indeed.

Kitty’s titillating #penmanship never fails. Note the hashtag as it’s totally appropriate in this shorter than short read that will fill in a moment of boredom, (you most certainly won’t be while reading The Commute) or a lunchtime break. Often, small packages deliver great things as is the case in this read. She took us readers to a whole different level regarding the daily chore of commuting and interrupted our train of thoughts which is exactly what we wanted. Her writing style is a bold and imaginative. It wouldn’t surprise us in the least if she’s started a new writing material trend, either. We don’t even have any qualms recommending this read to your better halves. Who knows … after reading this he might just sign on spot that has nothing to do with paper! Note: the verb commute and the noun, pen, will take on a completely new meaning.

“What Jude? What would you use?”
“I’d start with a measure of gin in a champagne saucer, because you’re a classy girl.”

Jump on that train to Birmingham with two strangers! Be prepared for an unconventional trip because you’ll be travelling with two very unconventional commuters. Paradise is just a stop or two away for Stacy and Jude is going to go out of his way to take her there. But whether she gets off; pun intended, on her stop remains to be seen. And oh boy, him using his charm, good looks and convincing ways to bring out the daring in this young woman made us want to pull on the emergency breaks.

Actually, we would go so far as saying he is really quite chivalrous to begin with. But when he starts talking dirty, both of us wondered why the author couldn’t have chosen one of our names for the female protagonist. Sobbing here ‘cause we just loved envisaging this man’s white dress shirt sleeves being rolled up and ready for action.

“Can you feel me unbuttoning your shirt, Jude? I’m going to slide my hands inside now.”

Ms French’s offering has whetted our appetite for much more to come and we can’t wait for the next instalment. The originality of this type of read had to happen and we take our hats off to her for being courageous enough to do it. We’ll never and mean never, feel the same about train travel again.Bravo! 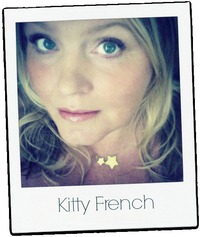 The Knight Trilogy has been a best seller around the globe, and is now available as individual books or as a complete trilogy box-set.

SIGN UP FOR KITTY’S NEWSLETTER for all the gossip and release information by emailing on kittyfrenchwriter@me.com

She writes full time, and lives in England with her husband and two little boys.