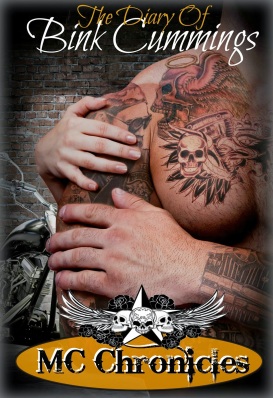 Must read: The Diary of Bink Cummings Vol 1 & 2 previously.
Tests, life is full of them. The world is constantly putting you through them to see how much you can take before you break. Before you are no longer who you are. Before your world dissolves around you. How long you can stay strong and overcome the obstacles.
It’s no secret that Big and I butt heads. It’s no secret that I not only dislike my mother, I hate her because she hates me. But can these people break me? Can they push me to the edge of insanity, ready to jump?
Having stayed and moved in with Big, I was living the life I never even knew I wanted. Every day was filled with promise, warmth and unconditional love. Until the day, it wasn’t. Until the day it all changed and I quickly learned what I’m made of, thanks to the truths behind many years of painful secrets.
It only took a single day for my world to never be the same. One day to change me forever. One day for revelations. One day I’ll never forget……
Steamy Adult romance
Warning: Contains Mature scenarios, and mass quantities of profanity. For Ages 18+
-This is not a Stand alone.

Author Bink Cummings was born and raised part of an MC family. Upon the incessant coercion from her sacred sisters, she has begun her newest journey in life–writing. When she’s not shacked up in her home, writing at all hours of the night, Bink enjoys riding motorcycles, taking care of her extensive roughneck family, and cooking huge meals. Especially her infamous chocolate chip cookies.
MC Chronicles Facebook Page:  https://www.facebook.com/binkcummingsauthor

Joe Murphy is a boxer. He’s twenty-eight years old and what most women would call hot. He’s a player, and his lifestyle is ruining his career.

Joe always hooks up with the wrong women, head jobs and debutantes looking to further their own careers. Joe’s had it, he’s crashing and he’s doing nothing to stop his decent into his own personal hell.

Darlene Russo is a single mom and a huge boxing fan. Except she can’t afford to attend any of the bouts, she watches from afar, she’s a cleaning lady for the biggest sports arena in Brooklyn, New York.

Darlene finds the drunken boxer, and helps him get home. The next morning she wakes up in his bed, scared and confused. Their night together comes in on her, the lovemaking and their use of no protection. Her worries were just beginning and Joe Murphy would face the test of his life.

Joe knew when he opened the door to leave his dressing room there would be some hot pussy waiting for him. He needed more than one piece of ass tonight and he needed a little blow, just a little to keep him hard. That shit was better than Viagra. There it was again, his cock, doing all the thinking for him. Fuck it; he needed a diversion, at least for tonight. Pussy was definitely the medicine he needed to cure his depression.

The two main protagonists, Joe Murphy and Darlene Russo’s mutual attraction was instant when they met for the first time and they quickly acted upon it. Joe Murphy is of Italian and Irish descent. A six foot wall of solid muscle, a talented heavyweight boxer and a talented ladies’ man. Being as handsome as he is hasn’t been diminished by fighting in the ring. Not only does he know it, but also the ladies know it.

Darlene Russo is of Italian descent. A single mother’s been left to care for her son Devon who is now seven. Times are hard but she kept things going. She works as a housekeeper for a cleaning company that cleans the coliseum where events such as boxing matches are held. Simply a job which helps pay the bills.

As soon as you start the book, you’ll see that Joe is certainly living up to his colourful reputation. And I mean the one that he has with the ladies.
However, he has lost yet another fight and had decided to drown his sorrows with alcohol drugs and women two in fact. The scoundrel! On a return visit to the coliseum, Joe bumps into the delectable Darlene where he seduces her with actions and words inevitably leading to what comes next. A hot scorching panty burning moment that kept me entranced! You cannot say that Ethan doesn’t know how to write a hot sex scene. Bravo Mr Radcliff!

Joe and Darlene’s feeling rise to the surface and both begin to question what they have for each other. Would the love of a good woman make this troubled boxer become what he was destined to be…? I don’t want to give too much away since you will find that answer in the book.

Tarnished was a well written short story but in my opinion, the author could have taken this story a lot further than he did. It would have been great to have seen Joe come a courting Darlene, getting to know her and her son in more depth. I felt this read needed to explore Joe’s determination to turn his life around, clean up his act and start training as a professional boxer before he started to win his fights. Overall I enjoyed this book and look forward to reading future releases.

The Taming of Molly Jenkins

The Collaring of Molly Jenkins