Corrado Moretti.
The world knows the notorious Kevlar Killer, but few have ever seen what lies beneath his armor. The abused child. The neglected teenager. The broken man. He always did whatever he had to do in order to survive.

It’s kill or be killed.

Throughout his life, he has been there in the shadows, a witness to everything from beginning to end. Bound by loyalty and honor, there’s only one thing he would sacrifice it all for: family.

Never get close. Never get attached. It’s a lesson that has been brutally pounded into him since childhood, but they’re words the DeMarcos make it difficult for him to follow. Through them he finds love and grieves loss, realizing the world isn’t quite as black and white as it’s made out to be.

MADE! This word takes on a new meaning in this angst-ridden story overflowing with hate and revenge. And above all, total obedience to the boss, Antonio DeMarco who runs La Cosa Nostra in Chicago, is never questioned. However, this is not his story; it is Corrado Moretti’s. Saying that, every minute detail regarding the author’s extremely well-developed characters has a justification in a strong storyline interwoven with fear. I felt this fear from the first chapter of a read which is so well structured and fast flowing, only to leave me utterly spent right up until the last word.

Corrado never had a chance to have a normal childhood. Circumstances mould his personality, make him grow up quickly. His father, Vito, is far too busy making a name for himself in the hierarchy of the Mafia. His mother, Erika, not only abuses him, she deliberately takes away the only anchor he had. Katrina, his twin sister, feeding on her mother’s hate, does everything in her power to make her brother’s life more intolerable.

Corrado learns quickly. To be seen but not heard, to obey and to honour his father, and more importantly, never to question becomes his motto. When problems arise in the ‘business’, these two young siblings are sent away for the summer. Reprieve from the chaos at home show Corrado how the other half live. He meets Celia and Vincent. Two normal kids who are loved unconditionally.

Vito has ideas for his son. It’s irrelevant whether he is still of school age, he wants him by his side; show him the ropes in Las Vegas—slowly. Corrado is eager to demonstrate to Vito that he is a Moretti. Being sucked up into the world of violence and blackmail makes him grow older and wiser beyond his years. More than aware that once he’s in, means there’s no turning back. He does what is expected of him and does it well. Furthermore, he has no inkling that someone had been keeping an eye on his progress. That person will have a huge influence on his life.

Against all odds, the father of the woman he has loved since his capability of comprehension, gives him his blessing. His unconditional love for Celia is so strong, so utterly innocent in his world of corruption, helps him to keep sane. I fell in love with her with her generosity. She tries hard not to pressurize him, has the patience of a saint; gives him a reason to live.

I am a huge fan of the God Father by Mario Puzo. Even though MADE is about the Mafia, this book is on completely different lines. At not one instance did I doubt the comparable quality. The word epic is an understatement and certainly worthy of a movie. Such explicitly descriptive scenes come alive, and to say that they distressed me is putting it mildly. This book’s characters overwhelmed, drew me into their lives, and the man I should have hated, I adored, suffered and literally sobbed my heart out for. Calculatingly cold and seemly distant from everything that revolves around him, made me ask myself over and over again whether this man would able to he conquer his nemesis. My heart went out for his wife, her brother, for all his loved ones.

I am writing this review with tears streaming down my face. Corrado’s story didn’t weevil its way under my skin. It touched my medulla. Ms. Darhower, you are a storyteller par excellence. Bravo! 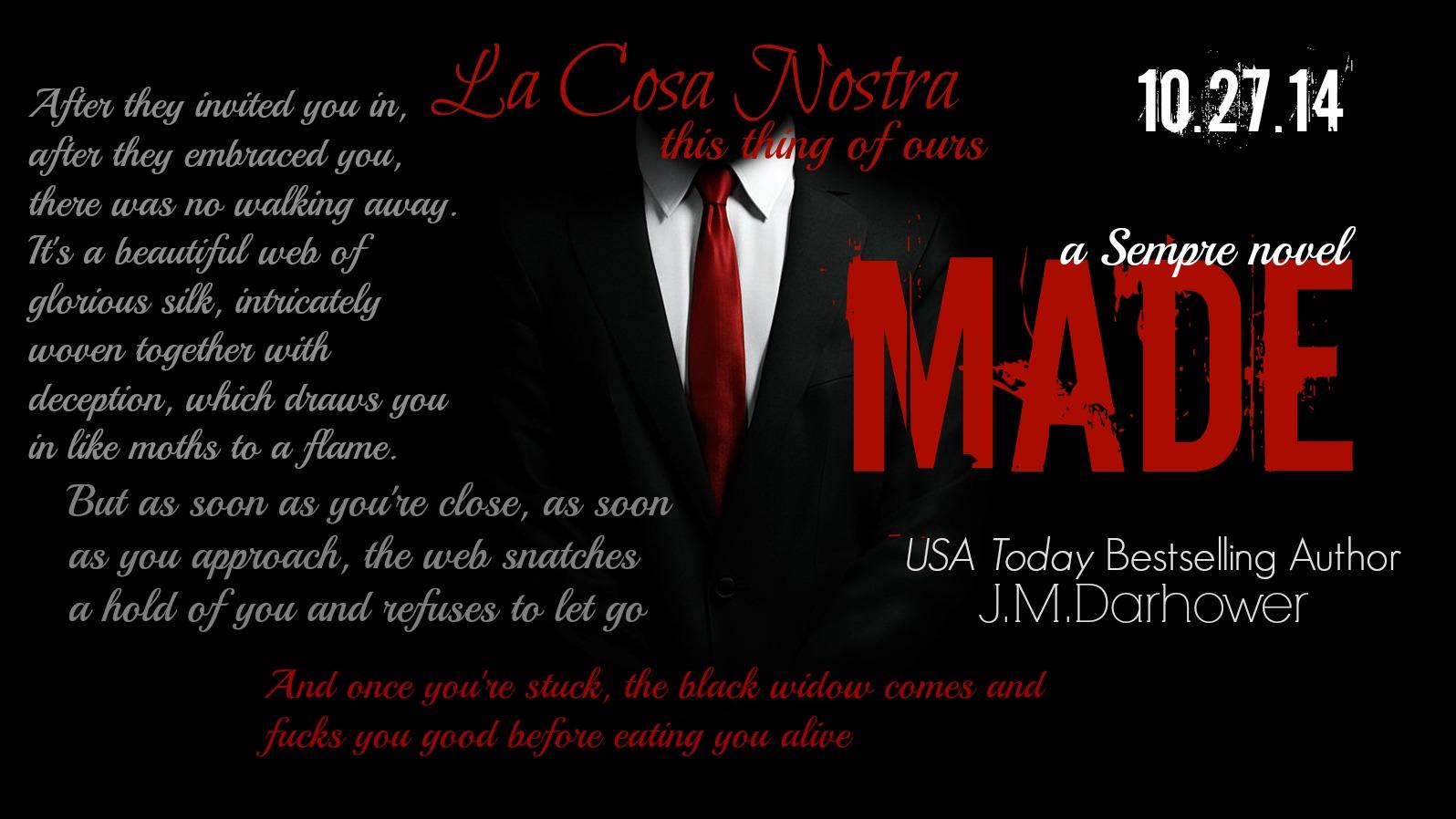